a single voice in open throated song
its beauty and intent a gift
can open hearts, tap into tears of joy
waves of brilliance sent out to meet infinity

_________________________
music and sunday mornings go hand in hand for me. the dogs are stretched out against the soft jewel tones of the old oriental rug on the dining room floor, in the soft lamplight of early morning. baroque music on the radio. coffee next!

the apple tree has given up its leaves
sightlines to the treescape skyline
of the mountain ridge are visible again
skeleton beauty skirting stripped down
lilac oak and beech, embracing stolid
pine arms, needles feathering
this morning’s straggler sun
a wedge of brown and gray and light
this small world peaceful
waiting for the snow

__________________________
this is one of those mornings when the contrast between the world outside my kitchen window and places of violence and sorrow is very stark. I am grateful for this peace, even as I mourn another shattered night and pray for France. 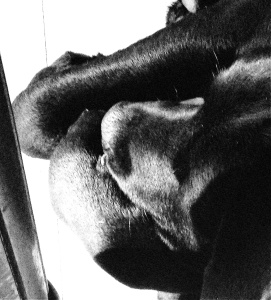 It turns out that I do have a muse. His name is Horace (Horrie) and he is my shadow, fetcher of slippers, foot warmer, and writing companion. A smart three year old black lab, he knows I am his work, is pretty sure that if I go out he should come along, and much of the time he does.

The other lodestar of his universe is Aggie, my steady, wonderful Newfie. Aggie raised him. They are inseparable, except when I’m writing, but Aggie sometimes honors us with her presence in the kitchen (my writing place).

unaccustomed light beams up from my small pond
a gift I grudge our downstream beaver cadre,
shermanesque repurposers of woods and mud
whose path had thinned the eastern trees
this morning’s sight was not the sliver moon
pendant under brilliant venus
that had called to me in bed
but dawn with spikes of leafless trees
in shadowed counterpoint

___________________________________________________
the back boundary of my land is a named brook, with a small seasonal pondlet cum mudhole, which was quickly becoming a full on pond by the time I realized what was happening at the end of this summer. beavers are amazing engineers, cross layering branches and twigs to make their dams, and excavating existing banks for mud to wall new water in. taking all this down is not easy, and I was quite sad about having to do it, until I discovered that there was no lodge out back but only “land grooming” for future expansion. I suspect this is merely the latest skirmish between the beavers and the owners of this house since it was built in 1796.

_____________________
living at the foot of a mountain means a casual glance outside is usually framed by tall pines, or stars dipping below the horizon just above the house. the seasonal sky shift is here, with winter favorites like Orion returning. the night sky has been clear most nights, and the stars have been bright in spite of the recent full moon.

All poetry, haiku, essays, memoirs, drawings, recordings, and photographs in this blog are copyrighted (copyright © 2013-2021 by Kate Rantilla, All Rights Reserved) and the sole property of Kate Rantilla. Reposts, retweets and FB shares are permitted. Otherwise, no reproduction of any kind, including credited copy and paste without express written permission. Thanks.

where we live on hope, hugs, and pie

In the thick of it

A Public Sphere for Poetry, Politics, and Nature

Thoughts on and off the trail of Life.

One Southern Girl's Life in Vermont

The View from Here

Teachings of the Horse

Life on the farm...life in general.

Life and death and sleeping on the ground